The Type Properties can also be used to define triggered events. Events can be found in the Functional section after Contain Flows. Events linked to the project root can be accessed directly through a right-click in Rules → Events. 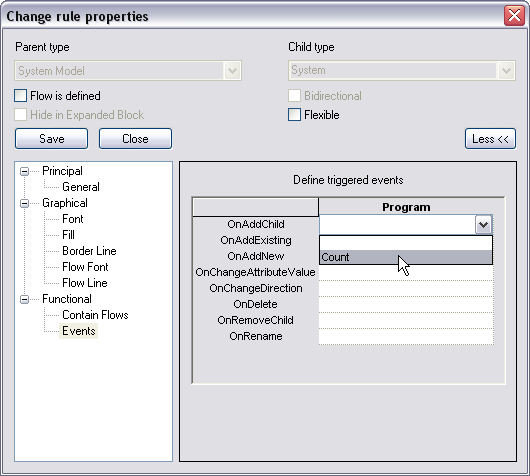 Actions can be triggered on the following types of events:

To use an event in the projection, ensure that the linked Program attribute is checked there.

To remove a triggered event, select the empty line in the Program list.

Before closing the window, do not forget to click on Save to save your changes.

The script triggered by the delete event may veto the delete by returning Py_False. This functionality is available for the GUI only. Moreover, the OnDelete script is not called for children recursively.

The following code will always prevent the deletion from the GUI:

Some events have an additional parameter to get the event type and the related object. For example, this code in event OnAddChild will print the new child name