The basic project data entity in is called an object. Each object can also have one or several named data fields, called attributes.

An object is unequivocally defined by its name and type. You can thus have two objects of different types with the same name while it is not possible to have two different objects that share the same name and type. On the other hand, it is possible to have several representations of the same object: a single object can thus appear at different nodes in a treeview, in different diagrams, or in different projections. However, the object in question remains always the same. In particular, its name and properties remain the same, and if the projections use the same type of filter, the visible children are identical.

While some of the different object representations stem from the fact that the project can be filtered in different manners, some of them are created by multiple object references. In , it is possible to create several references to the same object; we could also describe this as creating several instances of the same object. For example, if you have modeled the organic and functional architecture of your system separately within a project, it is possible to create references to the functions in the organic architecture. The most common case of multiple references is related to objects that have been defined as flows: there are typically two references to a flow (one in the producing object and one in the consumer).

More details about object properties can be found in Object Properties. 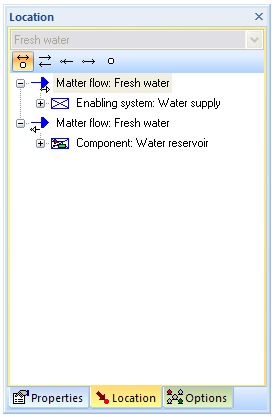 You can see/set the options where object is defined by using the Options feature in the right-click menu of an object. You can also display the Options tab through the Object Options button in the Object Panel of the Home Category.

See more details in Configuring Options for an Object

The following pages will show you what you can do with objects.