This is the only way to filter objects depending on their values rather than on the rule on which they are based on in the meta-model.

When modifying the enumeration attribute value in objects, they can thus suddenly disappear from the projection (depending on the filter configuration).

Let us illustrate the color example described above. 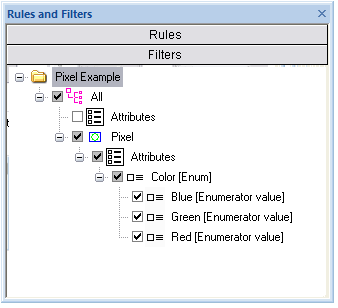 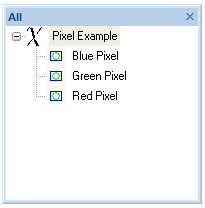 If all the three enumerator values are checked in the filter, all three instances of Pixel are show. If we now uncheck the value Red, only the pixels having Green or Blue as their attribute value will be shown. Furthermore, as the enumerator filtering becomes active, also the object which do not have a defined value for the attribute (when no default value has been defined) disappear from view. 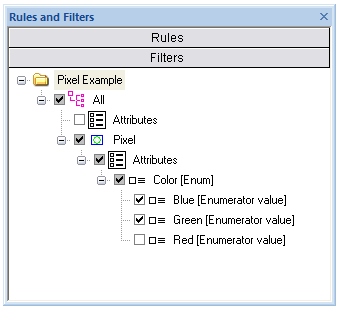 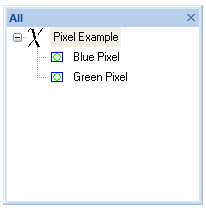 It is possible to configure the enumeration filtering in different manners in a given filter. The following configurations are possible:

The main rule is that when an object is filtered out by enumeration, all its descendants are filtered out as well. There is one exception concerning descendants of the same type. For them, the filtering with enumeration is re-computing and they may be kept (along with their descendants).

For instance, let us imagine an object of type System with children of type System. The System type has an enumeration attribute called IsVisible with values Visible and Invisible. You can now create object instances named System 1 and System 2 (System 2 being a children of System 1) with enumerator values Invisible and Visible, respectively. If you filter out the Invisible value in your projection, System 1 shall now be hidden from view but you shall nevertheless be able to see System 2 (the child of System 1) in its stead.