Skip to end of metadata
Comment: Migrated to Confluence 4.0

Go to start of metadata

In addition to standard process of objects identification in using their names other keys to identify object can be added during import.

Refer to the instructions of the first tutorial, but with using the type diagram below: 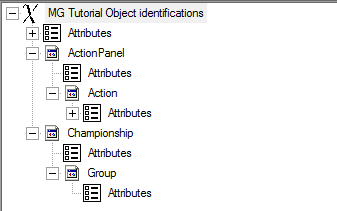 Note that the ActionPanel and Action types are only here to facilitate the execution of import and export scripts. After setting up the the type diagram, create an 'all' treeview (i.e. a treeview where all elements are checked). In this treeview create an ActionPanel object with one Action objects named Import which stores the Model Gateway import script.

Refer to the instructions of the first tutorial. In this part we will only import the Championship objects stored in the column "Championship" and the Group objects stored in the column "Group". As can be seen in the excel file above "Group A" is present in the "World Rugby Cup" and in the "World Veteran Rugby Cup" as well but those groups are different. To specify this difference as an object is unique in use a Key indicator in your Rule Model. Hence create an new Rule Model with a Championship composition sheet as pictured below:

The Key indicator goes from the object to his identifier

Your target model should be empty before importing only an ActionPanel is present to execute the import script as shown below:

You should get the following result (the Championship objects have been expanded):