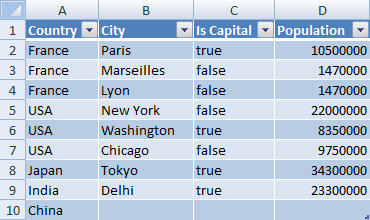 Start by creating a new project and setup the type diagram as below: 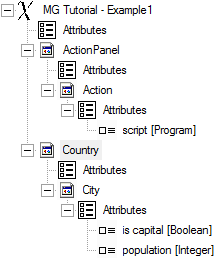 Note that the ActionPanel and Action types are only here to facilitate the execution of import and export scripts. After setting up the the type diagram, create an 'all' treeview (i.e. a treeview where all elements are checked). In this treeview create an ActionPanel object with two Action objects named Import and Export.

Copy the following program to the script attribute of Import:

Finally copy this second program to the script attribute of Export:

Our target model is now ready.

Note that there are two different projects open in two applications : the first one "Target model" (see above) and in the second one "Rule model" (see below).

First create a new WorkBook object in one the view above depending whether you want to perform an Import or an Export. From the WorkBook object attributes launch the 'Init Rule Model from Excel File' script selecting the sample Excel file when requested. Then go into the WorkBook object just created where the script should have created a Sheet object named countries (like the Excel sheet) and four Column objects below it. The script sets the columnName attribute of each of the Column with the title of the columns in the Excel file (note that the name of the Column objects is not important but columnName must be correctly set). In the view 'all' and 'Perform Export' the script also generates Display Before links between the column to represent their order in the Excel file.

In the next steps we will configure the Column objects and add relations between them. The screenshot below shows the final resulting Rule Model inside the Sheet Countries.

Finally run the 'Create Rule File' script from the WorkBook object in order to generate the Rule File from the model.

Why some _contentType_ values end with a sharp # character ?

On the Importance of the relations sense

The sense of the relations between the Rule Columns (like Parent Of, Producer Of, ...) indicate the Model Gateway the order in which it shall search for the corresponding items. In our current sample, the Model Gateway will start its search at the root, then will look for all children of type Country under the root, then for each found country it will look for children of type City.

The Rule model defines to import/export rules between the Target model and the Excel file. The table below shows the equivalence between Arki Objects in Rule model and Excel.

Sheet and Column in Rule model must have the same name as their counterpart in Excel ! Otherwise the Model Gateway won't find any match and no import nor export can be performed.

The import and the export take place in the target model where we have already created the Import and Export scripts.

You should get the following result (the Country objects have been expanded except China which does not have any children): To export the model data in the same file format, run the Export script and select the Rule File at the File Open dialog. The Model Gateway will open Excel and create a new workbook with the exported data. To actually save the data to an Excel file, you need to use the Save command in Excel.

To update the target model with new data, you simply need to perform an other import as described in the import section. The update creates new objects found in the Excel file and update modified attribute values. It cannot remove objects or relations between objects. For example this second Excel File will update the population of Marseilles and create the following new objects: Beijing, Korea, Seoul.